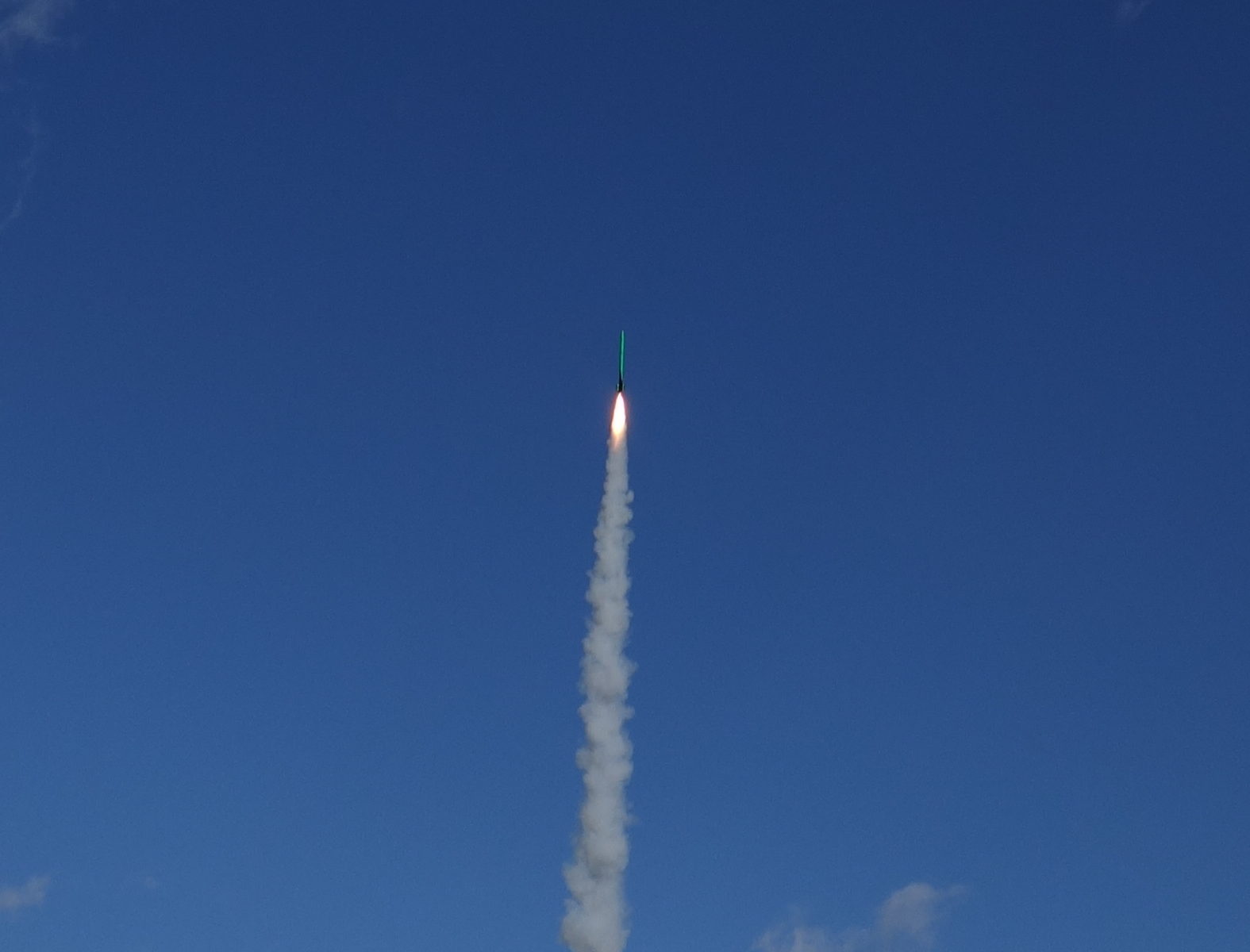 Having successfully obtained my level 1 certification at the June launch of the Big Sky Rocketry Association, I began to plan for my level 2 certification.

I decided to use the same Wildman Darkstar Jr rocket that I used in my Level 1 certification, but decided to go with electronic duel deployment for recovery during the level 2 flight. 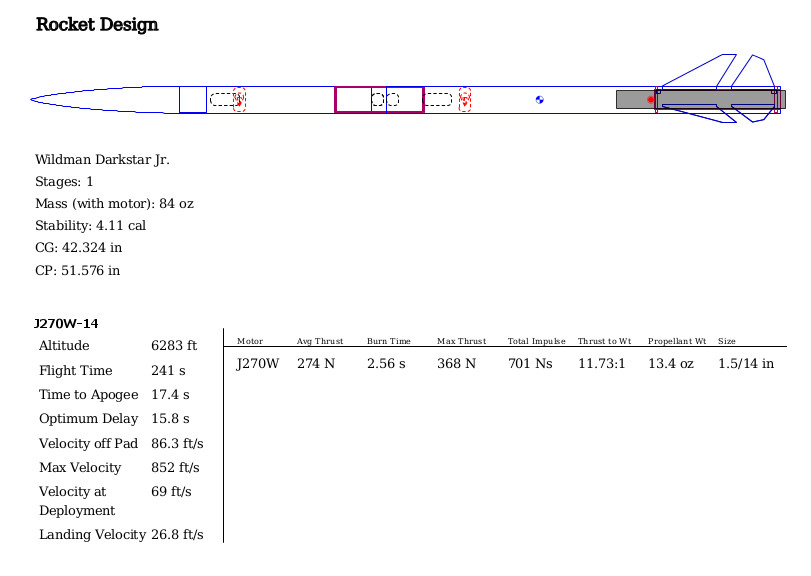 I did a detailed inspection of the rocket to ensure that it hadn’t been damaged in any way during the level 1 flight, and found that everything was in working order, and aside from a bit of dirt and dust on one of the fins, the rocket appeared as new.

Having flown the Quantum in the level 1 flight, I was a bit more comfortable with its operation and began researching ejection charges in detail. I then began testing various charge amounts in live tests for both the payload and booster sections. After a number of tests, I determined the optimum charges were XX grams for the booster section, and XX grams for the payload section. The nylon shear pins I had purchased also performed correctly in all of the tests, giving me confidence they would work during the actual flight.

The last bit of prep I conducted was experimenting with various methods of folding the main chute to fit it in the payload section along with the Eggfinder GPS locator. The 50″ chute I used during the level 1 flight was a tight fit in the booster section during the original flight, but with some careful folding and compression, I found it would fit cleanly in the payload section and eject consistently.

I had been studying for the level 2 test for about a month before my level 1 flight with the intent to certify and then complete the written test after the flight, but due to circumstances outside of anyone’s control, the person with the tests had to leave the launch early so the test still had to be completed. My studying system involved memorizing all of the questions in the NAR level 2 Exam testing pool, and then taking the on-line practice tests for Section A, Section B, Section C, Section D, and Section E at least once a day requiring a 100% on all sections. Using this method, it wasn’t long until I could quickly answer all of the questions in the testing pool correctly, and I was confident I would have no issue with the test itself.

Having completed all of these preparations prior to the July launch date, I was very disappointed, but understood and agreed with the reasoning behind the decision, when the July launch was cancelled due to fire dangers. As the summer unfolded with one of the worst fire seasons in the history of the state, I was unsurprised when the August and September launches were also scrubbed. Finally, with some much needed moisture finally arriving in the September, the October launch was confirmed as a go. The night before the launch, the weather forecast warned of winds exceeding 20 mph shortly before noon and continuing to increase throughout the afternoon, so I made sure I had as much of the rocket prepped as possible with the intent to arrive, take the test, finish prepping the rocket and launch as soon as possible to avoid the distinct possibility of the launch having to be cancelled due to the winds.

My son and I then got up very early on Saturday morning to make the 4+ hour drive to the launch location. The drive was uneventful, and the day dawned clear and sunny. The wind was fairly steady throughout the drive, but appeared to be staying around 10mph.

Once at the launch site, and having checked in with the launch organizers (who I had already contacted to ensure that someone would have the written test available, and to let them know I was planning the cert flight), I soon found myself sitting at a table with a copy of the test. My son, who is currently in school, found it funny that “dad” had to take a test just like he did, and he wondered if I would remember how to do it. When I completed the test less than five minutes later and got a 100%, he decided that I must have been pretty good at taking tests.

With the written test out of the way, it was time to prep the rocket and get in line to fly. There were three other flyers attempting certification flights that day, two for level 1 with one planning a level 2 flight if he was successful, and one going for his level 3. Having done most of the prepping the night before, it didn’t take long to complete my checklist items, connect the blackpowder charges to the Quantum, connect all the batteries, and prep the rocket motor.

After watching three other rockets launch with out issue, it was my turn and I headed out to far pad. The rocket slid easily onto the rail, but it took a bit of time finding the right size rocks to position the nozzle of the blast plate. After arming the Quantum, and ensuring that I heard the proper sequence of beeps, I then inserted the ignitor, hooked it up (after confirming that the clips were not powered), and confirmed continuity. 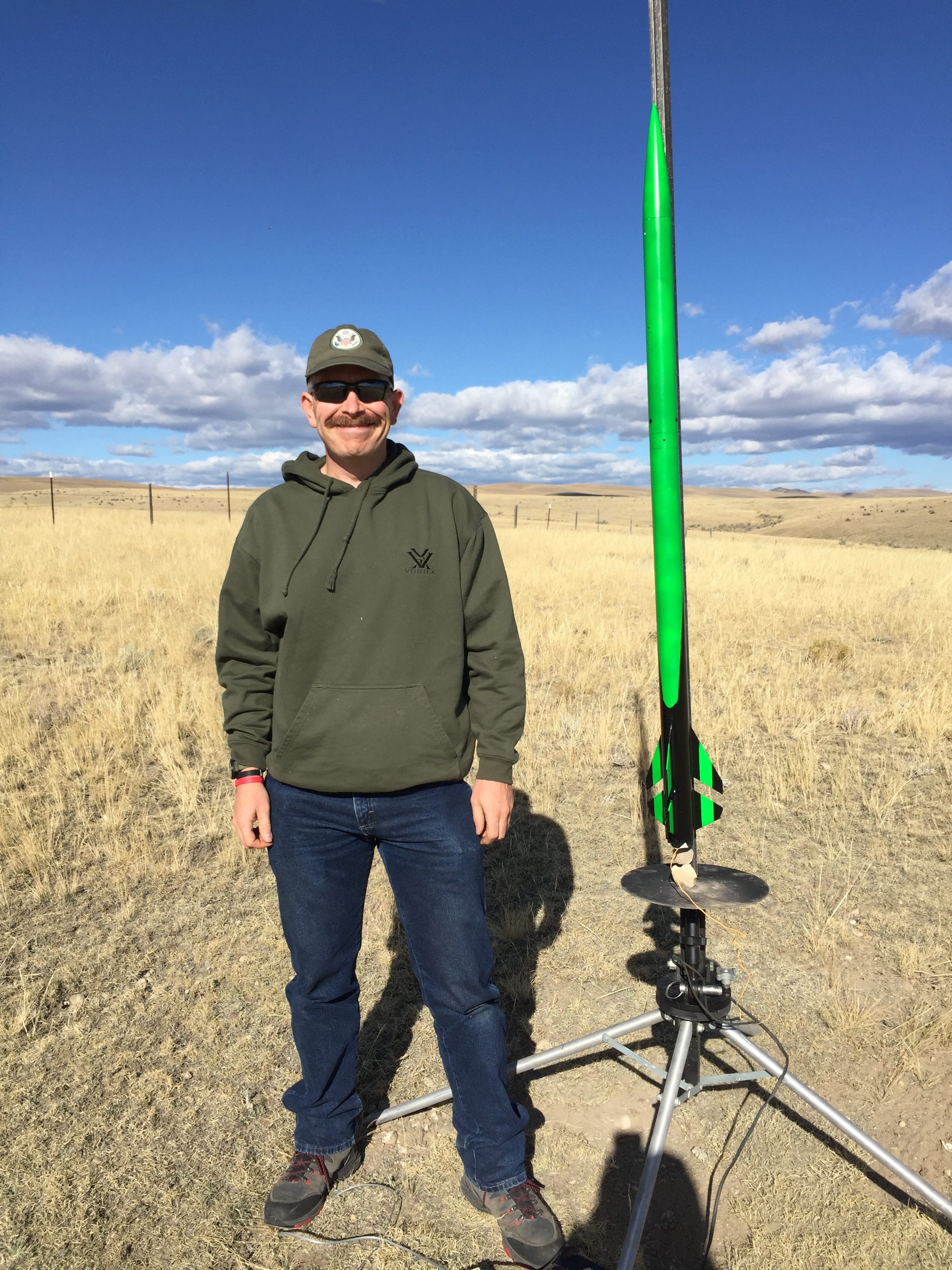 It was then back to the line where I announced the rocket and motor details, and my son counted down and pushed the button. The rocket motor ignited very quickly and the rocket left the pad leaving a large circle of exhaust. The flame coming out of the motor was as long as the rocket itself, and while the sound wasn’t as good as an M, N, or O, it was still very impressive. 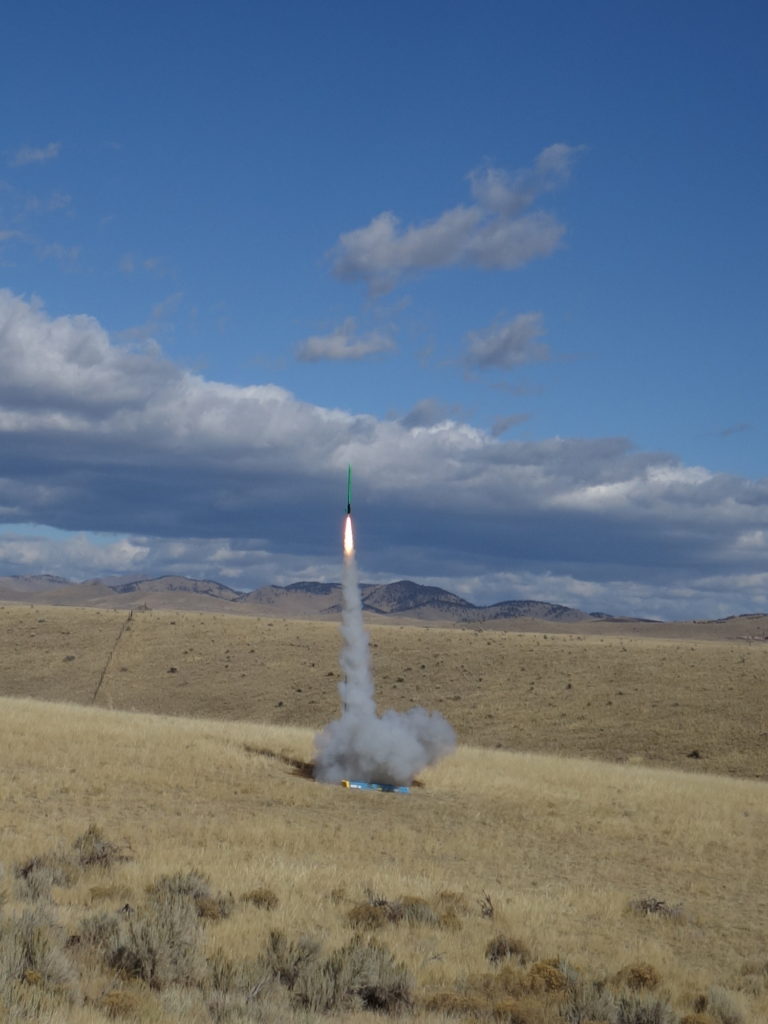 The rocket boosted straight up, and despite the steady winds, didn’t seem to be effected at all. 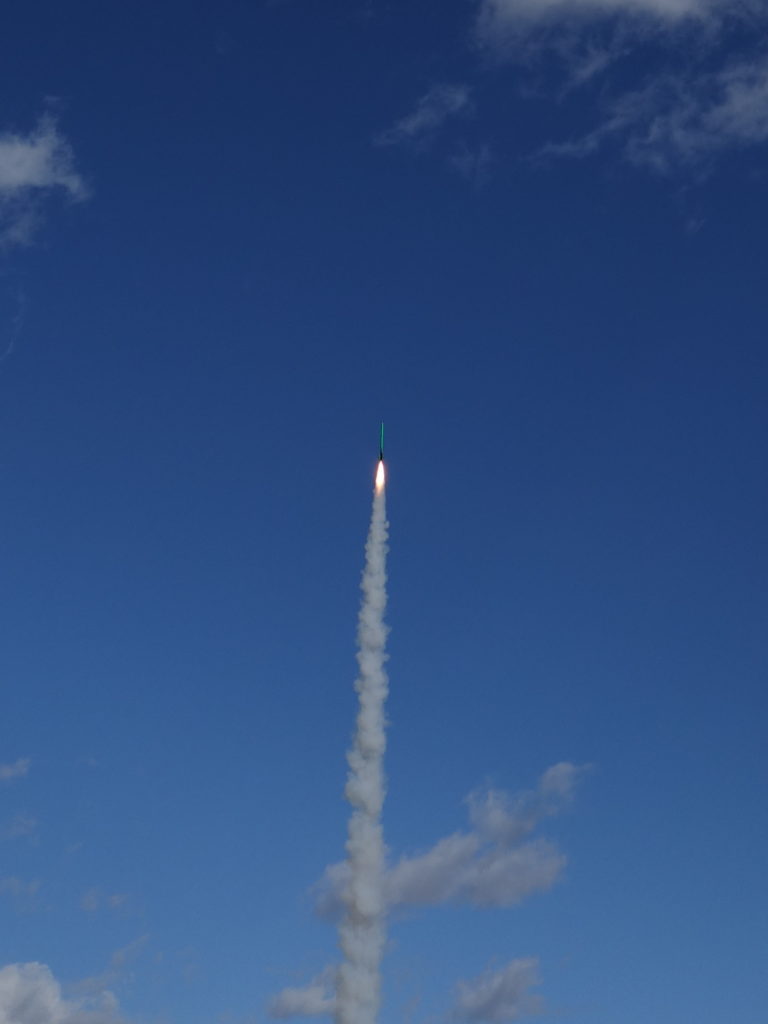 As the rocket continued its ascent, everything appeared to be proceeding as planned and the motor burnout was observed. 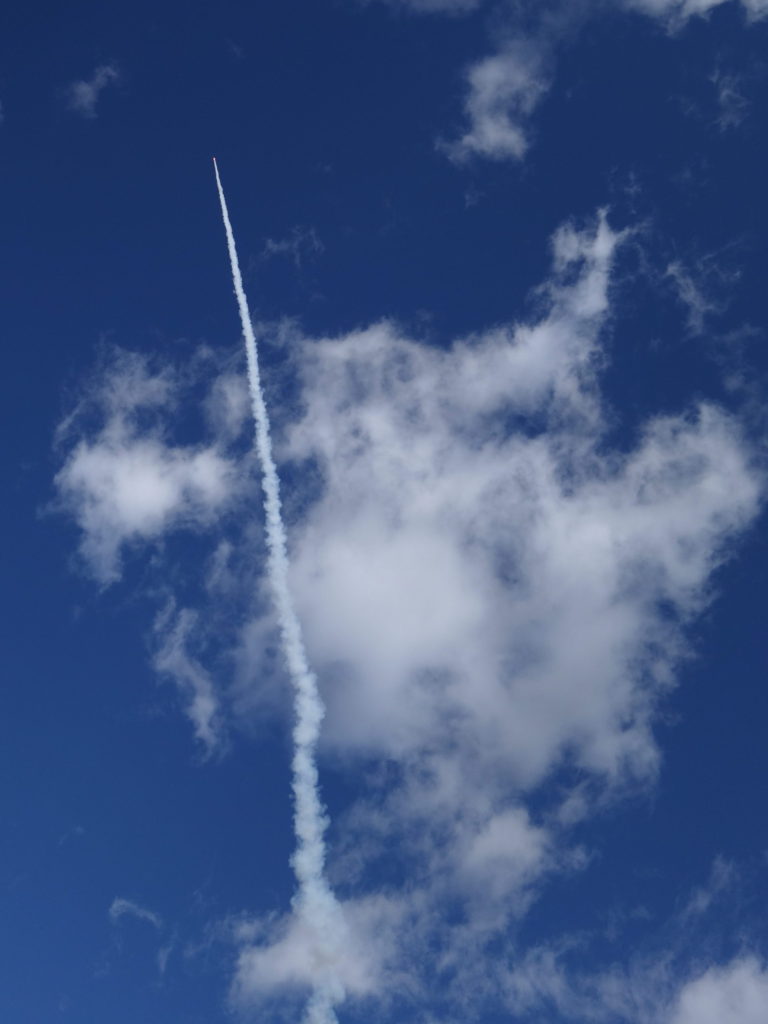 The rocket was visually tracked to apogee, and the two halves separated with the drogue shoot appearing shortly thereafter. The rocket was tracked throughout the descent, and the second ejection event was observed with the main appearing quickly and slowing the rockets decent. During the entire descent, the Eggfinder receiver was receiving GPS location details from the rocket, and the location continued to update until the rocket disappeared from view behind a nearby hill. 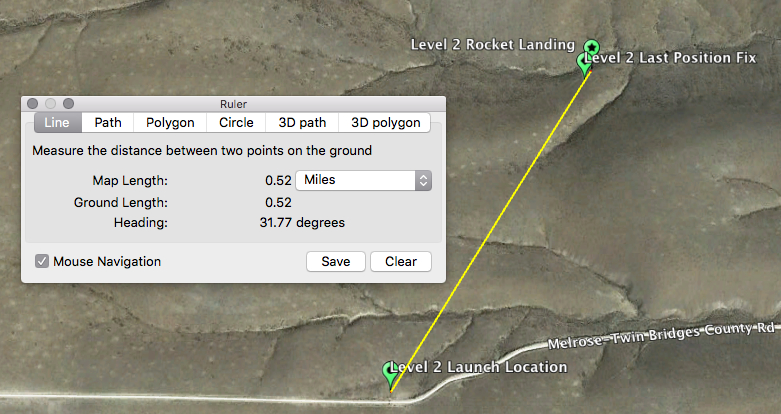 After entering the location data into my phone, my son and I began the hike to retrieve the rocket. After a small detour to help another flyer locate their rocket, we arrived at the location shown on the Eggfinder as the last known location. The rocket was not visible, but after holding the Eggfinder over my head, it began receiving updated location information, and the new location coordinates led us straight to the rocket. 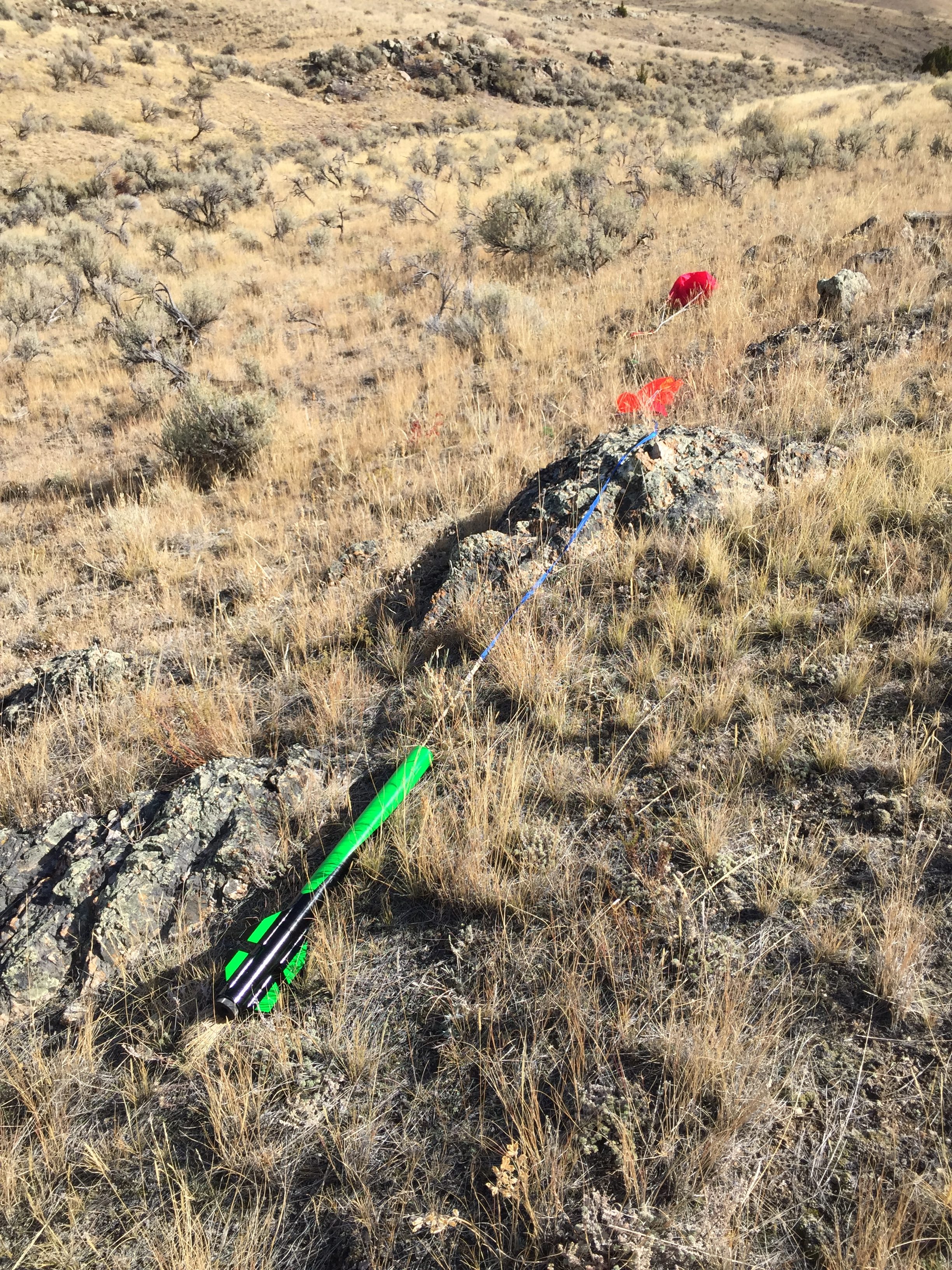 The rocket was undamaged and a quick inspection showed that all of the components were present and appeared to have functioned as planned. After downloading the flight data from the Quantum, I repacked the chutes, put the rocket back together and began the walk back to the line. 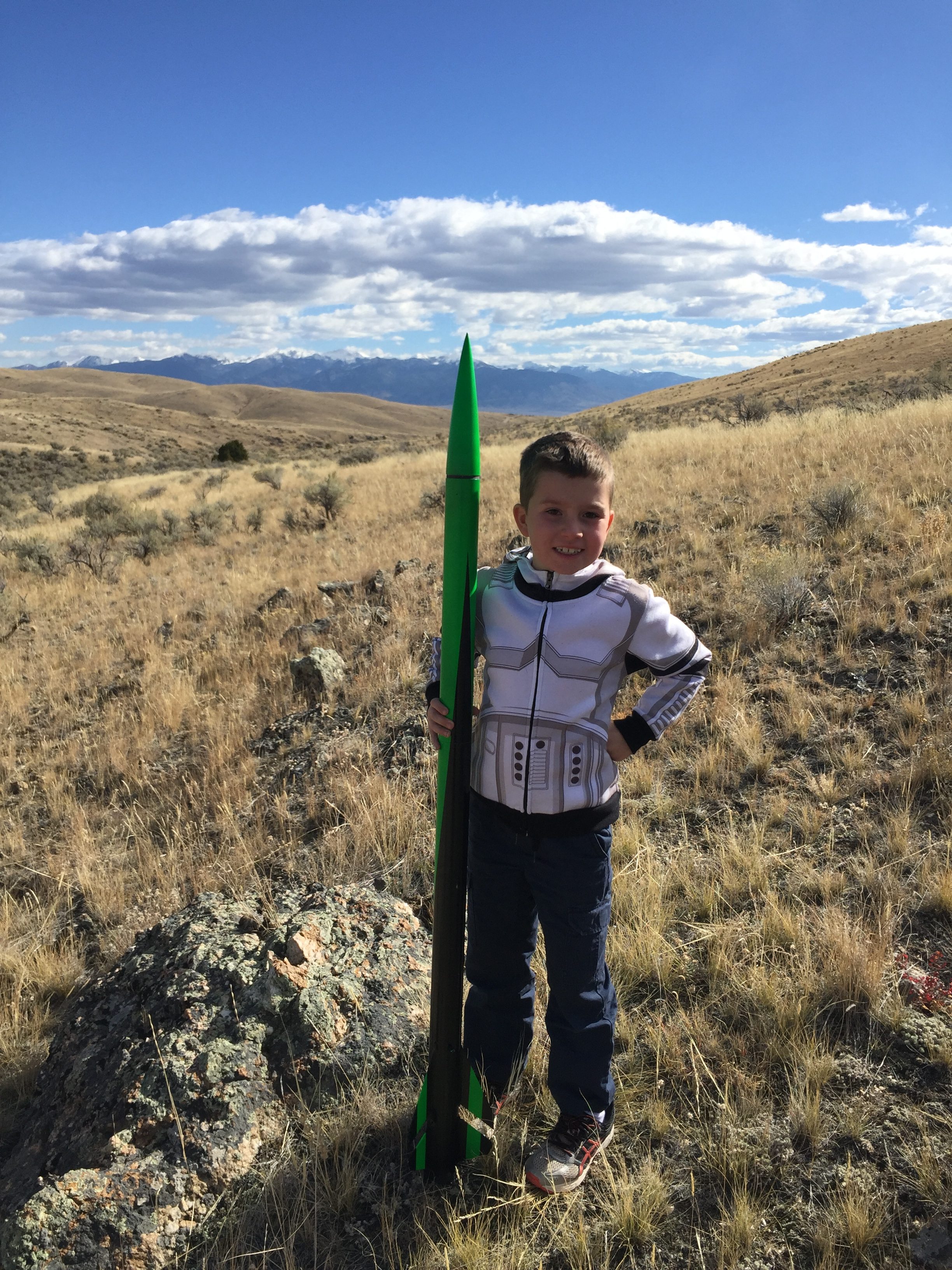 Once we were back, Steve Shannon inspected the rocket and confirmed that it was in flyable condition. He then signed off on my NAR Level 2 High Power Certification Application.

After mailing in the certification paperwork to NAR HQ, I again received an updated card and then a level 2 pin. The pins are pretty cool, but I’m not sure where I’m going to end up putting them as I would hate to have them damaged.